A PORTRAIT OF ACTRESS PAULA BEER

With an already highly impressive filmography to her only 21-year-old name, Paula Beer is only just getting started! And don’t let her petite stature or quiet demeanor fool you, because she is as serious as she is capable. For her, acting is not about seeking out the limelight and flashbulbs on the red carpet, it is the determination to “give viewers something to take away, to leave a lasting impression.” The first film she cites as having “released a voice, that gave me strength” is Jim Jarmusch’s ONLY LOVERS LEFT ALIVE.

Ever since she was a child, Paula Beer’s motivating question “when watching films and plays is: what moves me? What keeps me hooked?” So the first time she took to the stage, aged 12, at Berlin’s Friedrichstadtpalast, in what she calls “this exciting, absurd world”, she was determined “to reach out, get to someone’s self-consciousness and express ideas.” And to borrow from Fleetwood Mac, she went her own way as well!

“I decided against acting school,” she explains. “I had some lessons but noticed it was against my own being: the idea of changing myself at the very beginning because a teacher says I’m not good as I am.” Don’t mark this down as the arrogance of youth, though, because, she continues, “of course I want to learn and develop, but when the teaching process is from a basis of change and moulding, I prefer to learn and understand by doing, seeing what comes out and how it feels.” And for her, it is an approach that has paid dividends. 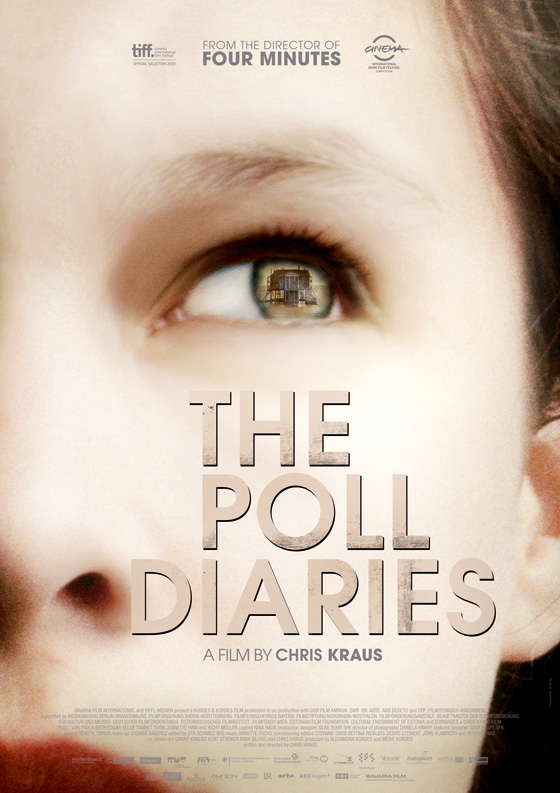 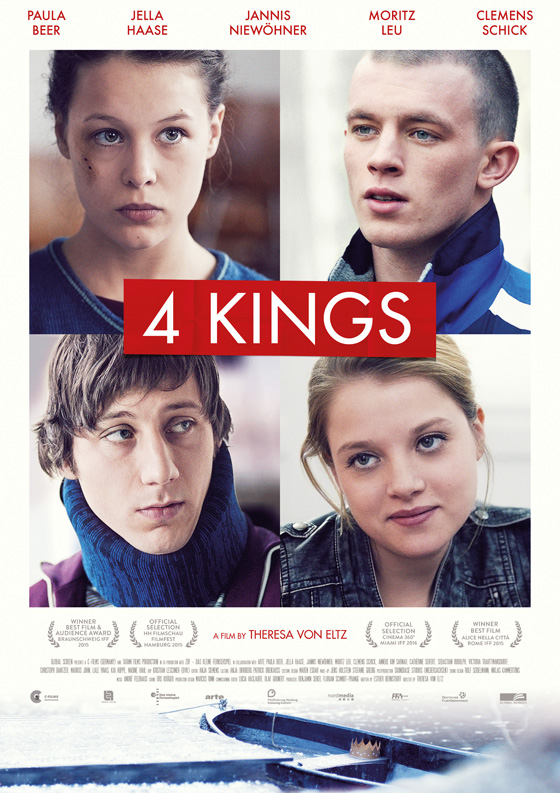 Currently working with the Academy Award®-winning writer-director Florian Henckel von Donnersmarck on WERK OHNE AUTOR (WT), Beer plays the female lead off Sebastian Koch and Tom Schilling. She was invited by the casting agent Simone Bär, for whom she has nothing but praise, to meet von Donnersmarck. At the time she had not even been sent the script so they discussed the role of Ellie and their perceptions of her. “As a director,” Beer expands, “he is curious, very smart, looking for truth and what is in the subconsciousness. He’s incredibly enriching to work with because I learn so much: there is so much in the script and characters. He can describe the processes and situations so well that it opens up a world for me as an actress.”

With regard to her own methods, Paula Beer is a consummate professional: “I always try to prepare as much as possible in advance. For me it’s super to go through the scene before the team arrives, have a short rehearsal, discuss if needed, see if there are any problems, then to have clarity to see it from all sides, then four or five takes to see which give the best variations. If you can nail it in four or five takes then it’s great. Sometimes it works on the first but then: can it be done better? Sometimes it takes eight till you’re properly in it, that something can come out of it. It all depends on whom you are acting off and the director.” Sometimes, she continues, “you have to work it a different way. That going from moment to moment becomes increasingly important so you stay fresh. Even a thirteenth take can be the best!”

In a business where divas, male and female, are common, Paula Beer’s not even in it for her ego! “I don’t need to hear if the director likes it in the sense of getting praise,” she says, “I want to hit the right direction. It can be silent understanding but the main thing is we go in the same direction, working together because actors can get doubts quickly.”

Born in Mainz but moved to Berlin when she was twelve, Paula Beer says she learned two priceless lessons from her parents: “They are both artists, painters, and from them I learned how to structure my time and self-express within that frame. That’s essential since acting has many other facets that go beyond just performing.”

Paula Beer started on stage and made her cinematic breakthrough in 2009, in Chris Kraus’ POLL, in which she plays a young girl in 1914 Estonia who meets a wounded anarchist. Calling it “an incredible adventure!”, she is open enough to admit, “I only understood it all a few years later! But it set me in the direction I still follow today: concentrated work, the need to think what the character thinks or it does not come over. It influenced me incredibly. I learned from Chris how to act!”

Not surprisingly, Paula Beer has already won various accolades. In 2011 she took the Bavarian Film Award as Best Young Actress for POLL. In 2014 she was nominated in the Best Actress category at the Austrian Film Awards for THE DARK VALLEY. She played Luzi, a young Tyrolean village woman fated to marry a much older man, in this tale of “the strength of love in a negative sense”. Getting nominated was very exciting, she says, “but was not my motivation. It was great to realize the film elicited such emotions; I was nominated for the Austrian Film Award and then we got nine German Film Award nominations and won eight! Crazy!”

Paula Beer also appeared in Volker Schlöndorff’s DIPLOMACY, in which she played Ingrid, the great granddaughter of General Choltitz, the military governor of occupied Paris who refused to destroy the city on Hitler’s orders. “That was fantastic!” she enthuses. “I had to speak French: I learned it in school and then we also had exchange students from Switzerland in the class. Volker took me for walks through Paris and explained what Ingrid sees and what goes through her head! It was huge fun and he knew what he wanted and how to implement it. It was a father-daughter-relationship and my first time filming in France as well!”

This year sees the release of François Ozon’s FRANTZ, in which Beer plays Anna, a young girl dealing with the death of her fiancé after WWI and who meets a Frenchman who knew him. Describing it as “how hard blows can strengthen you, the liberation from grief”, she clearly had a ball working with its director: “He’s fast! He burns for his work! He looks for people who fit with him, you can laugh and scream with him. It was a very fast process: I was in Paris within a very few days and got the call a week later! He pulled me into the development, asked me about scenes, moments and other characters. We had only two months, 38 of 39 shooting days together, and he gave me the room to play the character. He has a very clear and simple language, which is great to work with. He tells you the facts as opposed to talking all arty! Very, very professional and organized, conscious, he thinks in terms of the finished film.”

Life outside the cinema for Beer is musical. She loves singing, “can play the piano and a bit of guitar.” She loves drawing but admits she lacks patience at times. And stories, no matter how narrated in whichever form, she loves “discovering worlds, to understand the feeling behind experiences.” When visiting the cinema, “if a film touches people and they react, that’s great! When they are grabbed by the feeling, the same energy, all laugh together, all shocked together, when people are open to it, that’s what so great about making films, large and complex themes become approachable and you’re also a part of that.” She is also trying her hand at writing, as “another means of expression” but admits, happily, this is still a work in progress.

“Open to all genres,” Paula Beer is keen to try her hand at the lot, especially comedy: “a huge challenge because it’s the hardest genre. I like how a light touch can still narrate depths. Personally, I like any character who has a conflict and is seeking something, the changes and developments they go through.”

So how does she do it? What’s her method? “I work with a coach, Frank Betzelt,” she explains. “I’ve been with him since I was 17. We work through the character, what I need, look at the inner struggle, where she starts and how she ends, her character arc, basic temperament of each role, look at the relationship to the other characters and the significance, create a network I can use, then look from scene to scene to get the behavior and uniqueness of the role.”

Once she and Betzelt have fleshed out the character, Beer then sometimes writes “a diary to create a written monologue, to defend the role from fear and humiliation, make it come alive through the character’s everyday. It depends on the role, of course, and my preparation varies greatly accordingly. There’s no general formula. It’s understanding their problems, wishes, fears and needs that’s important. When I’ve dived in then it’s very exciting to let go of it and see what I can do on my own via costume, make-up, director, acting partner and then finally to see it on the screen.”

Two years ago Paula Beer took a class in acting school in London, and is fulsome in the different approach taken to the art there: “they act in the moment between you and your partner. There is an encounter and openness, how to be best there for the partner, the possibility to narrate a greater openness and honesty.” Does it work, though? Oh yes! “I’ve had three moments in my career when I was so secure with my partners I trust­ed myself and something broke over me,” she continues. “I was able to fall into the character and things happened with me I’d not experienced before. It was incredible to fall from reality and experience something as the character herself, to create a reality before the camera, to be in that state is the essence! That’s what I’m working for and why I work!”