“Theresa von Eltz needs changes of scenery. It’s true that the filmmaker, whose directing debut 4 KINGS generated an international sensation, lives in Berlin – currently, however, she also has a “little place to stay” in Vienna, where she is working on new projects. “I love to explore new cities, I seem to require it for my creativity,” she says.

Born in the Rhineland, she has always been curious and enjoyed an adventure. When only 19 she applied to the documentary filmmaking course at the University of Television and Film in Munich, submitting a documentary about an Albanian woman from the Kosovo, LULJETTA. She was invited to interview but at the time she was considered too young. And so she studied History and Political Science in Berlin first and completed a Master’s degree in Oxford, more from interest than in preparation for a profession. After graduating, she applied again to every conceivable film school, receiving two offers of admission: she decided in favor of the National Film & Television School in Beaconsfield/England.

“There, they took a sensitive and careful look at the individual, and supported the directors in their approaches to storytelling,” she says, explaining her choice. Another deciding factor was two teachers there who are themselves legendary filmmakers, Stephen Frears and Ken Loach. “I learned a great deal from both of them,” she says, and adds with a smile, “but they were also very strict”. Frears paid most attention to dramaturgy. “He didn’t hold back with criticism and he also fell asleep in the editing room quite regularly,” the director recalls, “then I knew that something was amiss with the pace of my work”. In contrast, Loach was concerned about how the students worked with actors. “They supported me and made huge demands,” she says, but the academy was also important for her because it offered the structure and means to make her first films. 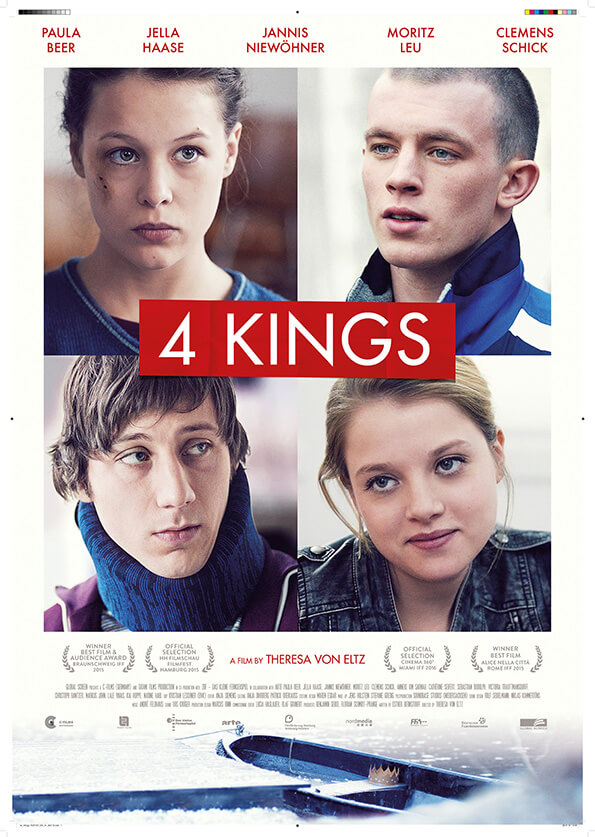 Theresa von Eltz chose a screenplay by author Esther Bernstorff for her full-length film debut. 4 KINGS tells the story of four youths sent to a youth psychiatric unit’s crisis center over Christmas in order to avoid escalating conflict at home. “I was immediately interested in the situation, that is, in Christmas at a youth psychiatric unit,” von Eltz says. She was able to relate to the characters and to empathize. “I myself come from a big family and I have worked with difficult youngsters.” To the present day, she accompanies handicapped and sick children on holiday once a year. This is a time that helps to ground her because “I am interrelating with people with whom I feared the contact at first, but who have taught me a lot about life and above all about happiness in misfortune”. It is possible to sense this empathy, this view of life from a different perspective in every moment of 4 KINGS.

She sees the greatest challenges of direction as being in realizing – with great sensitivity – the screenplay through moving (in both senses of the word) images, and in the right casting for the characters. “But it’s not just a question of having a good film at the end; it’s also about cultivating an interesting and challenging atmosphere during shooting, and continuing to develop personally.”

The four young leading actors, Jella Haase, Paula Beer, Jannis Niewöhner and Moritz Leu, were at the threshold to adulthood themselves during the shooting in winter 2014. “I caught them in the final moments of their youth, and something very special emerged as a result. They gave 100% of themselves, and that’s only possible when you are able to trust one another 100%. That is also the director’s task. Empathizing with the characters is something that’s impossible to learn, either you can or you can’t. Ultimately, this can distinguish directors considerably.”

And this emotional awareness is shown during shooting work, e.g. when von Eltz, for the rape scene in a TV crime story, first played through the scene herself and so enabled the 14-year-old actress to overcome her nervousness. “It was important for me to experience what it feels like, putting myself in the situation and so understanding exactly what I am demanding from my young actress. I can only create trust in this way. Behind the camera, otherwise, you are very much protected.”

4 KINGS celebrated its world premiere at the Rome film festival, where it won an award as Best Directing Debut, and later it also received the German Film Award in bronze. “A lot changed following those prizes,” the director says. “Before that, you are just as passionate but you have very few opportunities to make films because the industry doesn’t know you or have faith in you. Film festivals, film awards and a bit of attention are really helpful in that sense. In addition, you have to follow a long and rocky path first. For some, this path is shorter, and for others it may be longer.”

In general, she has noticed an increasing interest in German films abroad, above all in women filmmakers. “It’s taking a long time, like everything in the film industry, but something is changing at the moment,” she believes. “There is a demand for women filmmakers, their stories and their female perspective, and that is helping us to develop more of a presence. That should really be a matter of course.” For Theresa von Eltz, there was never any doubt that she would become a director despite all the obstacles and challenges in her path. “I always wanted to tell stories and to move people with them; filmmaking is not a hobby, it’s a unique voice enabling you to express so much, and you need to use it in the right way. You can only direct if you give it your all. And you have to be able to fight!”

Currently, she is preparing her next TV film and working on two lots of material for the cinema, a tragicomedy and an historical drama. She also finds the world of series very exciting. She enjoys the artistic freedom that cinema productions offer her by comparison to films for television.

Despite her training in Great Britain, first of all she intends to remain true to German film. “The idea of an international production is very stimulating, certainly, but that’s a big step,” she says. “I prefer to take small steps.” Anyway, the content is more relevant for the filmmaker than the country of production. “The main thing is, you tell good stories.”